Webinar – How to Unite the World’s Democratic Forces 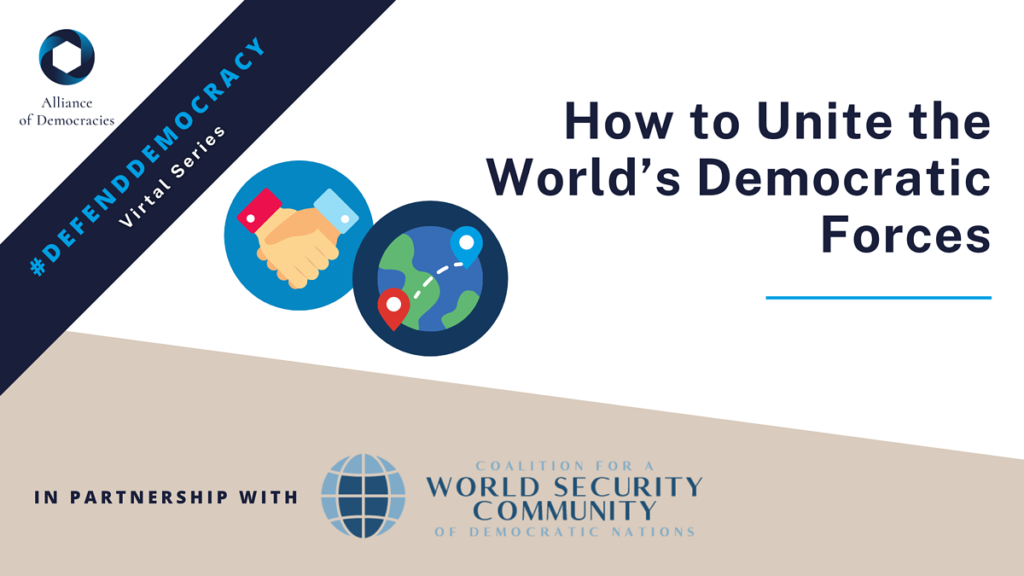 How to Unite the World's Democratic Forces

President Biden has promised to convene a Summit for Democracy and to renew the spirit and shared purpose of the nations of the free world. The hope is that this Summit will not be merely a one-off event, but set an agenda for democratic renewal.

UK Prime Minister Johnson has during his chairmanship of the Group of Seven (G7) included democratic allies such as Australia, India, South Africa and South Korea. This could lead to the formation of a Democracies 10/11, which would strengthen cooperation among the world’s major democracies.

The Alliance of Democracies Foundation was founded to unite the world’s democratic forces to counter rising authoritarianism and at the 2021 Copenhagen Democracy Summit, launched the Copenhagen Charter which proposes three specific areas for returning democratic multilateralism to its ascendancy.

And the Coalition for a World Security Community of Democracies (CWSC)

proposes a permanent forum open to leaders of all countries committed to democracy, human rights and international law. The OECD could be its implementing arm on economic issues, and NATO, which should become a global military alliance, on security issues. It could evolve into a global community on the European model and become an island of freedom, peace and prosperity in a turbulent world, attracting an ever growing membership.

Join the Alliance of Democracies Foundation in partnership with the Coalition for a World Security Community (CWSC) for an exciting discussion about making these approaches to an alliance of democracies work in practice from the G7 Summit to the Summit for Democracy. Join us on Wednesday, June 9th from 2:00 – 3:00 pm CET/1:00-2:00pm BST/ 8:00 – 9:00am ET.

Please register below, all details on how to access the event will be sent prior to the session.

In case you missed it, watch the 2021 Copenhagen Democracy Summit here.

Webinar – How to Unite the World’s Democratic Forces

Community of Democracies and China

Quotes of the Year

Recap of the Copenhagen Democracy Summit

PrevCommunity of Democracies and China